Will I ever have the guts to teach unplugged? 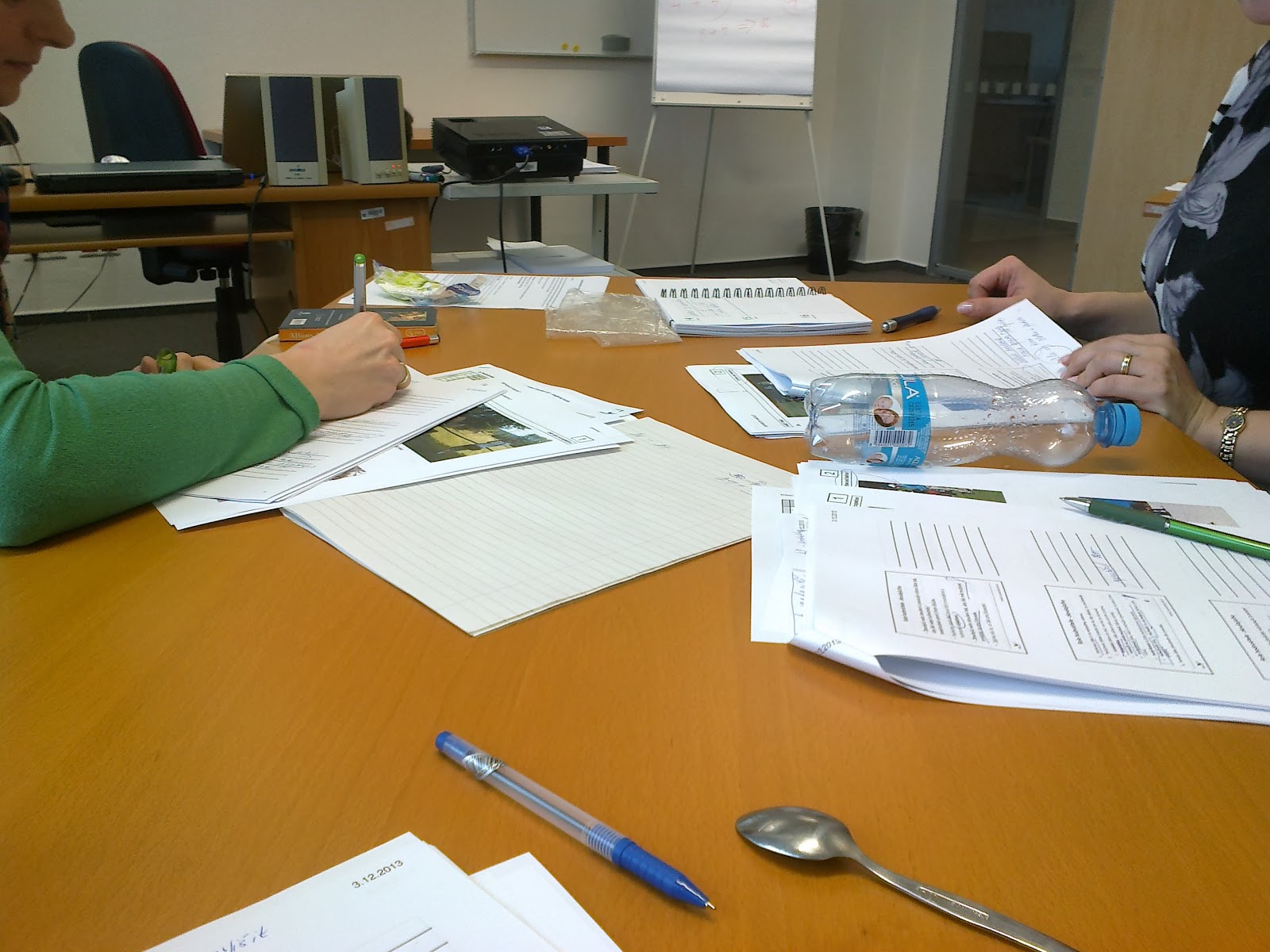 I think I've already confessed that I'm fatally attracted to the so-called Dogme approach. For those who are not familiar with the term, it is a communicative approach to language teaching that encourages teaching without published textbooks and focuses on conversational communication among learners and teacher. Not that I teach 'unplugged', i.e. in a dogmetic way; as a matter of fact, my affection is purely platonic - most of the time I use traditional coursebooks and although I try to be creative and innovative, I teach in a more or less traditional way. The trouble is that one never knows what happens with a relationship when platonic love becomes physical. If I started teaching unplugged, would/could this become a long-term, stable and satisfying relationship under the given circumstances, i.e. within the current system of Czech education? I can't think of a colleague who likes teaching without coursebooks, and those 'coursebookless' daredevils I hear legends of have always been viewed with suspicion and, as far as I can remember, they were all eventually made jobless. Although this happened a long time ago, right after the fall of communism (when anybody who had legs and arms could teach English), I'd rather not take the risk. As they say it's better to feel safe than sorry, I only dream about Dogme and keep telling myself: maybe some day my dreams will come true ..... Meanwhile I'm not lazing about, though; I'm getting ready for the day. I read about Dogme, I think about it, and I seize every opportunity to discuss it with anybody who's interested. Oh dear, I've always found it ridiculous to theorize about something one doesn't have the guts to implement.

Nevertheless, it will make sense now when I say that I was pleased to learn that The Approaches Conference 2014 organized by IH ILC Brno had a Dogme workshop on its programme. There were other interesting sessions running at the same time but I didn't hesitate; I virtually dragged my friend into Room 1 (luckily she didn't really protest). There were only nine participants and I wasn't surprised. What surprised me was that at the beginning of the session only three out of nine teachers (me and my friend included) had actually heard about Dogme before. Why on earth had the others decided to attend the workshop? I must admit that the programme poster looked inviting:


Over the last 10 years Dogme, a ‘new’, ‘modern’ ‘radical‘ approach to ELT, has aroused more emotion - both for and against - than almost any other approach to teaching. ‘It challenges not only the way we view teaching, but also the way we view being a teacher.’
(Meddings and Thornbury)

This session will introduce the core ideas behind the approach and how they apply to everyday teaching, ‘Emergent language’, ‘materials light’ and ‘text driven’ are all terms that will become familiar. Find out why it’s nothing to be afraid of; indeed you probably already use Dogme approaches in your teaching. As this session will be conducted largely using a Dogme approach attendees should be prepared to participate fully.
It occurred to me that maybe the words ‘new’, 'modern’ ‘radical 'emotion' 'for and against' were the best lure for the attendees who had no idea what Dogme meant. 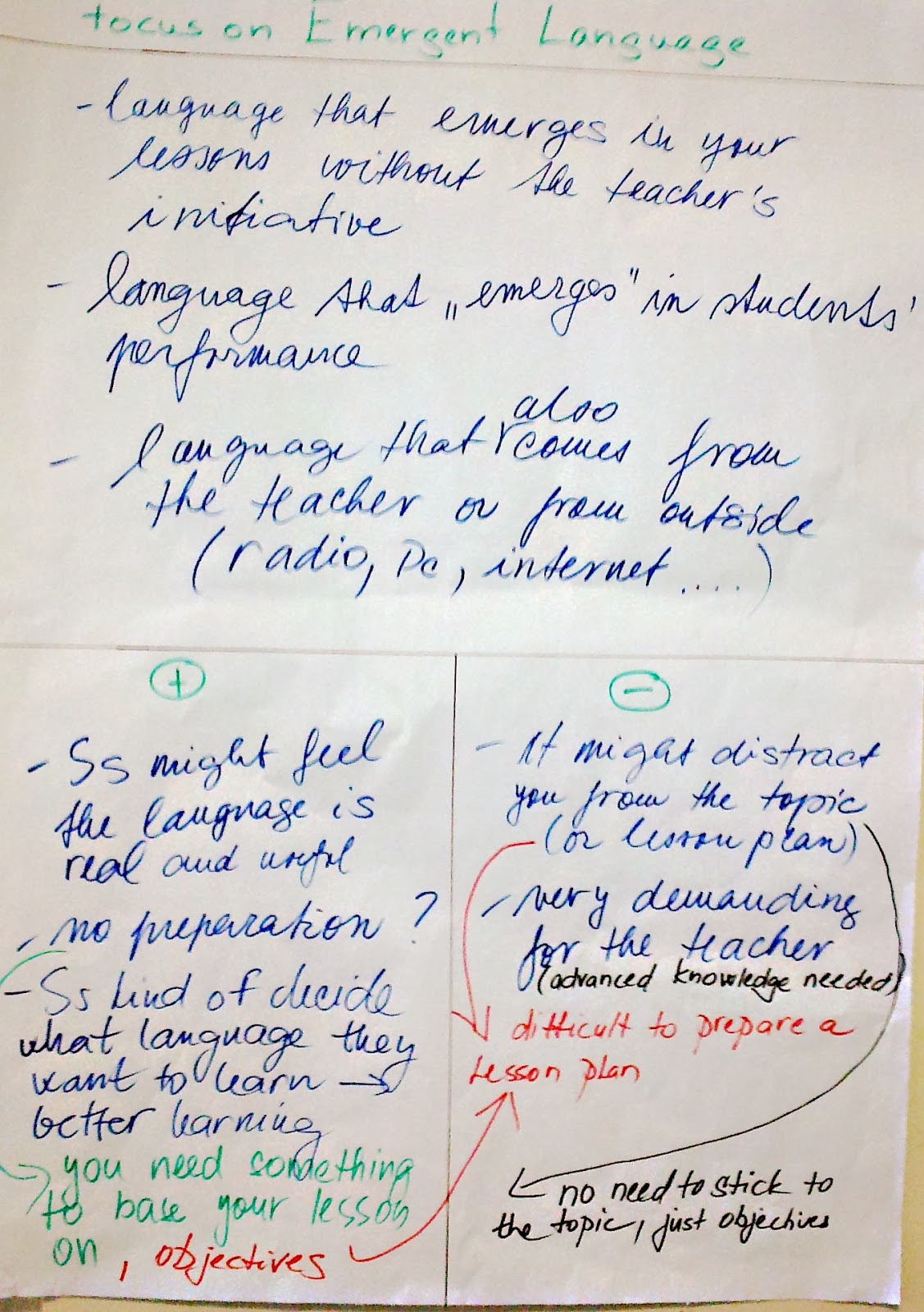 Anyway, it was a great workshop. Hats off to the presenter Charles Du Parc, who kept his word and conducted the session using the Dogme approach. It would obviously be hypocritical to lecture about the Dogme approach in a non-dogmetic way. At first we were given a little background and we were introduced to the three basic pillars of the Dogme approach - conversation/text driven, material light and emergent language. We were given a large piece of paper and markers per group and we ended up with myriads of ideas that had come from us, the participants. In other words, most of the content of the lesson sort of emerged along the line and it was a truly enjoyable process.

Now, the important question is: What made it so enjoyable, productive, memorable and thus effective? What makes me want to write about it? Is it just my interest and my passion for the topic? Is it the presenter's personality that's stuck in my mind? Is it the methodology he used? Probably a bit of everything - a kind of magical mixture; something we need if we want to teach unplugged successfully.

There are many questions and no definite answers. But there's one thing I know for sure; throughout the session, I felt that I was the one who was important and responsible for the my learning - my colleagues and I were actually creating the content and the input of the 'lesson'. There were no wrong ideas and, surprisingly, we eventually arrived at the right conclusions. How come? I believe it was because we had some background knowledge and experience, and because we negotiated and shared ideas. Of course, the presenter must have had some objectives in mind and he had certainly anticipated a few concrete outcomes, e.g. By the end of the session the participants will have discovered themselves what Dogme is about. The will have created posters with the positives as well as the drawbacks of the approach. But he could have never predicted the actual process of 'getting there'. We might have been uninterested and slow. We might have found the topic too unfamiliar. We might have had no background knowledge to build on.

And this is why I find the Dogme approach so attractive and why it is such a controversial issue - because the process is unpredictable and the outcomes are uncertain (and more difficult to test). But at the same time it can be an enormously creative journey - exactly what life is like... So once creativity in education gains more importance than predictability, the Dogme approach may be tolerated and accepted by the majority.